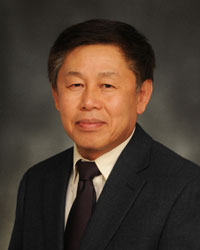 Dr. Rojanasakul is a Professor in the WVU Department of Pharmaceutical Sciences. His research focuses on understanding the cellular and molecular mechanisms of cancer and fibroproliferative disorders. His research has led to the discovery of key molecular targets and signaling pathways involved in cancer cell death and chemoresistance. The overall goal of his research is to develop more effective strategies for the treatment and diagnosis of cancer. Another important area of Rojanasakul's research involves nanotechnology with an emphasis on the health effects of engineered nanoparticles. His research develops exposure models and assay methods for nanosafety evaluation, identifies key properties of nanomaterials influencing their bioactivities, and elucidates the cellular and molecular mechanisms of pathogenesis. Dr. Rojanasakul is principal investigator of several NIH-funded projects and is part of a global task force focused on the complexity of cancer. He is a Robert C. Byrd Professor and Benedum Distinguished Scholar at   WVU. He is also an American Association of Pharmaceutical Scientists Fellow. Rojanasakul earned his PhD in pharmaceutical sciences at the University of Wisconsin-Madison and a Master of Science degree in pharmaceutics at Massachusetts College of Pharmacy and Health Sciences.